Gearing ourselves up to go and meet Zahi Hawass this morning, Sam and I took a taxi to Zamalek. When we got there we were told that Dr Hawass was even busier than yesterday and couldn’t see us today. Our contact said that he would ask Dr Hawass to sign our permissions and fax them through to the Luxor office on Sunday. We are still not sure whether this was said just to get rid of us and we were already quite expecting to be refused, but haven’t given up all hope yet. We had a coffee at a very expensive and trendy coffee shop in Zamalek and were ready for the rest of the day. 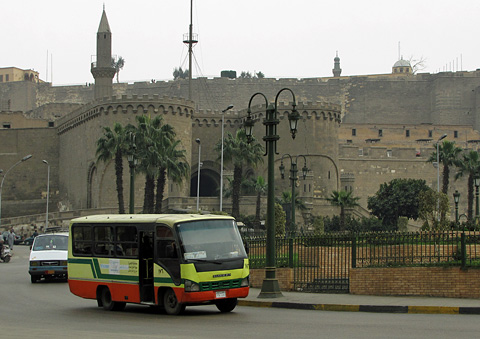 We took a taxi once more through the horrible Cairo traffic – I can’t get used to how bad it is now – and Sam tells me that January is the worst month for smog, which isn’t hard to believe. We got out at Sultan Hasan mosque near the Citadel and when I took out my new Canon camera I found that the settings had all changed somehow and I couldn’t get it to work properly. I had to rely on my older camera, which is just as good, but having just bought a new one specially for this trip I was keen to use it.  Also the sky was a grey leaden colour and this makes me feel cheated when I’m out with my camera in Egypt. 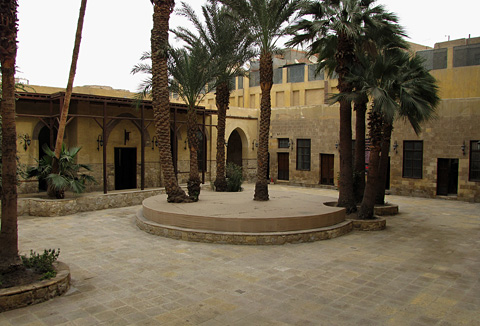 I wasn’t in the best of moods as we set off walking down the street towards the Sufi Theatre, past the little Mausoleum of al-Muzaffar Alam ad-Din Sangar. However, when we found that the Palace of Amir Taz (1352) is now open after restoration, I felt better. It looked very inviting and we couldn’t resist going inside. We were not even charged admission. Last time I had seen this building it was sheathed in scaffolding and polythene sheeting and was being restored by a joint Italian and Egyptian archaeological mission. Apparently the building had been severely damaged by an earthquake in 1994 and has had to be substantially re-built. 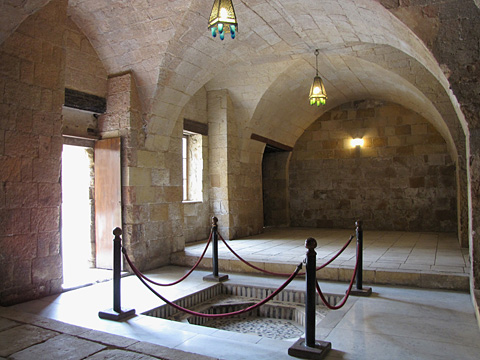 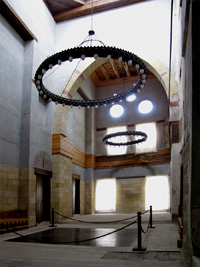 The next couple of hours were spent exploring the vast complex of the palace with its many rooms and corridors. It must have been a wonderful place in its heyday. All of the rooms are surrounding a central courtyard with palm trees and there are many staircases leading up to a warren of different  levels of the palace. Some of the carved and painted ceilings are absolutely gorgeous and in several of the halls, massive wooden cartwheels of lights are hung. The Mamaluk Amirs were responsible for upkeep of a private army of soldiers who lived in the palace which also doubled as a fortified barracks. At one side of the courtyard there were two exhibitions, one about the Mamaluks in Cairo which was very interesting with several artefacts from the period on display as well as large informative history boards, and the other a large art exhibition from the Luxor Art Symposium with many lovely paintings. 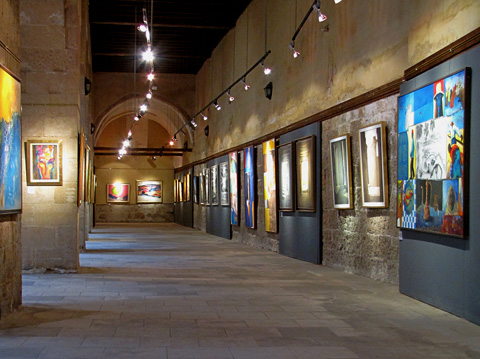 Back out on the street we continued down to the Sabil-kuttab of Umm ‘Abbas, a more modern building constructed in 1857. The glittering ornate gold on the façade always amazes me. 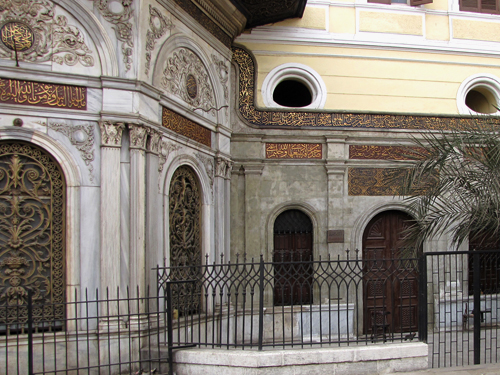 Turning left past the Khanqah and mosque of Sheikhu (1355) we walked back along the street to the citadel – no mean feat in the busy traffic. The taxi ride back to the hotel took about three times longer than usual. I think part of the problem is that many of the roads are now one way and we were driving round in circles if were moving at all. We couldn’t even get out and walk as there was no room to open the doors. Back in the hotel we once again had a drink and sandwich on the terrace and downloaded our pictures from today. 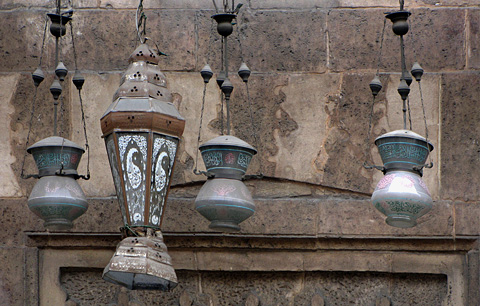 The traffic was better later when we went to the Khan al-Khalili for dinner. Getting out near the al-Azhar mosque, we walked through the subway to the bazaar and to a restaurant we’d been to many times before, al-Nada, where I had a lovely meal of rice with crispy garlic, called fetah, and lots of spicy vegetables. We ate in a downstairs dining room which has been decorated with many old photographs of the Egyptian royal family and old Cairo scenes from the last century. Afterwards we went around the corner to a coffee shop near ‘Egyptian Pancakes’ where we sat for a couple of hours. 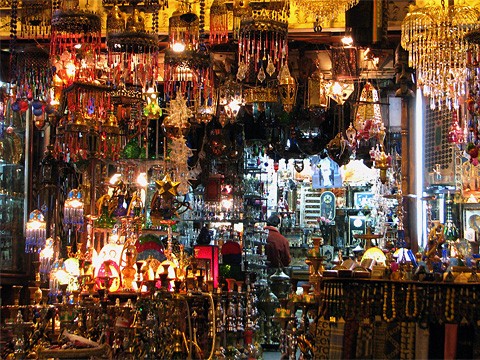 I’ve never seen this area so quiet. There were very few tourists around at this hour but several Egyptian couples or families with young children were out shopping. We were surrounded by the bright lights of the bazaar, the shops selling lavishly embroidered tourist galabeyas, rows of decorative shisha pipes and hanging lamps of every shape and size, lit by colourful bulbs and reflecting their surroundings in glittering dangling crystal droplets. Every five minutes one vendor or another would stop at our table and try to get us to buy something. Sam haggled for a while over some sabhas (prayer beads) and later we saw the ‘Rose lady’, a friend of Sam’s, who gave us both flowers before moving on to a table of Saudi gentlemen dressed in their distinctive white robes and chequered headgear. By Midnight the shops were closing and the place was becoming deserted, it was time to leave.