Today Sam had arranged with the Luxor property letting company to have a look at some of the other villas and apartments on their books with a view to her next Egyptian trip and invited me to tag along for the ride. She was particularly interested to see what was available on the West Bank. 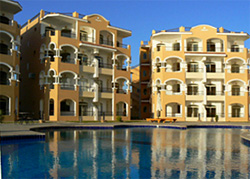 After picking up the two reps from their Luxor office we headed out of Luxor towards the bridge, but before crossing the river they insisted on showing us a new development just past the Moevenpick Hotel. The complex is called ‘Egyptian Experience’ and consists of several blocks of very well finished and highly priced apartments on the east bank of the Nile. Parking in the gardens, we went to have a look at a duplex apartment which was available to rent for short periods. The huge apartment on two levels with long balconies both sides, a roof terrace, large living area, kitchen and three bedrooms, was beautiful. It was spacious, light and airy and had fabulous views over the Nile. Perhaps it was suitable for several people sharing, but for Sam, 7000 EL a week was way out of her price range.

Our next stop, at a more reasonable rent, was a lovely house on the West Bank near the Ramesseum. As we drew close I realised I had visited the house before when a friend of mine had lived there for a while before the present owner bought it and I had fallen in love with it all those years ago. The owner was there to show us around and gave us a cup of tea in her beautiful garden full of flowering trees and brightly coloured bougainvillea. It was a paradise, but unfortunately would not be available at the times when Sam would want to rent it. 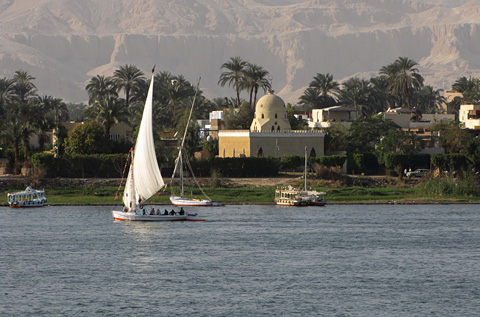 Our next stop was at Ramla, on the banks of the Nile near the ferry port. In the years since I used to stay on the West Bank at the Gezira Hotel just around the corner, a whole crop of new buildings have sprung up, stretching along the shoreline. Last time I was along here it was a muddy track that only camels used, where tourists could take rides along the river bank. The camels are still there, but now have smart new housing too. We were told that Luxor council have plans to build a new corniche along the West Bank and it has already smartened up considerably.

Many of the villas and apartments at Ramla are available to rent and we were shown several, some fairly average and others I wouldn’t feel comfortable in for one reason or another. I knew Sam was looking for something a little more special than the average Egyptian apartment that is often badly finished, sparsely furnished and rather gloomy. It wasn’t until we arrived at the last apartment that she found what she was looking for and I agreed, it would be a very comfortable place to stay. Whether it will be available when she wants it is another matter. 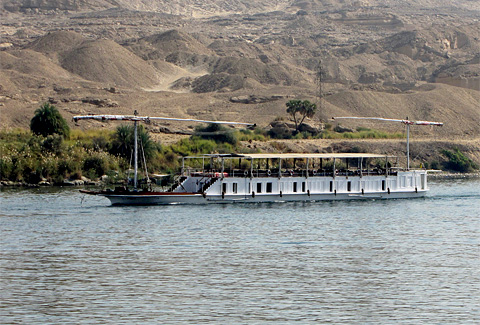 Then for something completely different. Our last stop was to have look at a dahabeya moored in the river which was available to hire for private cruises. This would be more my style and I could just imagine sailing south to Aswan in the beautiful old sailing boat, lounging on deck with a cool glass of something in my hand. I think there were half a dozen guest cabins all compact but well furnished and a larger master cabin that was quite splendid. There was a wood-panelled lounge and dining area and of course the upper deck where there were sun-beds and shady areas. We were told that the crew and all food and drink was included in the price of $120 per person per night. If enough people were interested it would be a good way to do a Nile cruise in a more leisurely way, stopping where we wanted and not being tied to any tour company itinerary. Aswan and back would take a week, so it wouldn’t be the cheapest Nile cruise on the market. Tempting, but not what Sam was looking for – at least we had seen it and it could be an idea for the future.

After stopping for a cold drink in a Ramla coffee shop we made our way back to the East Bank and home feeling quite exhausted, though neither of us could think why. It had been an interesting day and a good exercise in seeing what was available to rent. An apartment is so much cheaper than staying in a hotel for two or three weeks. When we arrived back at the Villa Mut  the electricity was off again, surprise surprise! I began to think that maybe a hotel would be a better idea after all.

Posted by Su on October 14, 2009
Posted in: Uncategorized. Leave a comment

The morning dawned clear and sunny as it almost always does in Luxor. I love the way that you can depend on good weather here, even in the winter months. If it is cloudy or even raining, it never lasts long. The Abu el-Haggag mosque is close to the back of the hotel block we are in and the first thing I heard this morning was the early call to prayer, beginning with the slow deeply resonant ‘Allahu Ahbar’ chanted in the pre-dawn light. Within minutes the other minarets had picked up the chant and the sing-song voices, albeit mostly recorded these days, rang out from all corners of the town. Then I knew I was truly back in Luxor.

We all met up for a leisurely breakfast and decided we would spend our first day here in Luxor, just looking around. Malcolm and Fiona haven’t been here for a while and wanted to reacquaint themselves with the town and get their bearings. The first thing on my list as usual were the bookshops – just a peek to see if anything important had been published that I don’t already have. Aboudis, my favourite, is right next to the hotel, so this was my first stop, but nothing took my fancy this morning. The trail led from Aboudis, to the other Aboudis next door, to Gaddis on the corner and inevitably to the Amoun Restaurant for coffee later in the morning, where we all sat outside in the sunshine to watch the world go by.

Afterwards I went with Sam to visit the offices of the convoy police to see if we could get permission to go to Medamud Temple, which is only a kilometre or two north of Luxor and to Tod, a few kilometres to the south. Although these sites are very close to town and tickets are sold at Luxor Temple, we still needed to arrange the visits with the tourist police. Inside the police station a few flights of scruffy concrete stairs led us to the convoy office and we were asked to wait to see the officer in charge. We had thought that all this would be merely a formality and were horrified to be told that we would have to pay a small fortune for a police escort, including a specially-hired air-conditioned minibus to take them. It would seem that funds and transport are short and they would not let us go without us fulfilling this condition. After much argument, we refused to pay and tried another plan. We also wanted to visit the tombs and wadi at el-Kab and knew that again we would have to join the convoy for this trip. Fortunately this time the commander said that we could join the regular convoy as far as el-Kab, then I guess we would be in the hands of the Esna police and so not his problem. Well, at least we had won one battle.

At mid-afternoon we all met up again at Luxor Temple, cameras at the ready. I wanted to have a good look at the battle reliefs on the outside wall and the low afternoon sun slanting from the west was ideal for showing these in their best light. It’s an area of the temple that many people neglect but is very interesting. The western exterior wall gives details of the Syrian wars of Rameses II and on the wall surrounding the King’s pillared court there is a depiction of Rameses attacking a fortress at Dapur. On the outer wall where the court meets Amenhotep’s colonnade, Rameses can be seen shooting at the Fortress of Neheren. These reliefs show his Lybian war as well as the capture of the city of Satuna in Palestine. There are some lovely floral motifs here, similar to those in the ‘Botanical Garden’ at Karnak. Further along, on the outer walls of Amenhotep’s sun court, we see again, remains of the poem of the Battle of Kadesh which is also shown high on the temple pylon.

In Luxor the sun is enveloped rapidly at dusk into the violet cloak of the Theban Hills. One minute it’s light and the next the temple is floodlit with only darkness beyond its walls. But this is also a good time to see the reliefs, thrown high by the shadows of the artificial lights. The tall columns in the Colonnade of Amenhotep III look magnificent at dusk. My next stop was the ‘Birth-room’ where I always hope to get some  good photographs of the divine birth of Amenhotep III, which in daylight are quite shallow and worn. The low lights provide the best chance of doing this. Here the story enfolds with Queen Mutemwiya , supported by Amun-Re and Hathor, before Tuthmose IV. These are the parents of Amehotep III. The god Khnum stands with his potter’s wheel, ready to make the Ka of the new king. We see the queen led to the birthroom and she delivers her child while seated on a block throne in the presence of the gods. Later we see the Ka of the newborn Amenhotep presented to Amun-Re by Hathor and the king presented to the deities.

By 6.00pm the temple was beginning to fill up once more with tour groups. This is one of the few sites open to visitors in the evening and it is always crowded. We almost had to fight our way out through the mass of people coming into the temple, through the pylon gate, although things have improved since a new rear exit was opened near the mosque.