This was my last full day in Egypt and most of it had been spent on Luxor West Bank. We were going there again today. Robin and I had visited Malqata earlier this year and I had fallen in love with this remote site on the edge of the desert, once the palace and town of Amenhotep III but now deserted, the ruins mostly devoured by the blowing sand and the natural destruction of the centuries. The area was first excavated in 1888 and later much of the remaining monument was removed by Metropolitan Museum excavations during the early years of the 20th century. Most of the palace and town was constructed from mud brick and wood, which doesn’t often survive the ravages of time and which is why there is little left of the buildings. There were originally four palaces with service areas plus several large villas for the elite of Amenhotep’s court, as well as homes for the local population. There was also a Temple of Amun here. 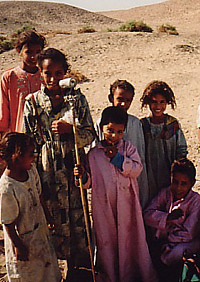 We wanted to see the site again and perhaps walk over the area of Birket Habu where Amenhotep had constructed an artificial lake for the entertainment of his queen, the Great Royal Wife, Tiye. Birket, in Arabic, means ‘lake’, and this was part of a T-shaped harbour, connected to the River Nile by a canal. The excavation of the harbour left huge earthworks, mounds of sand up to 14m high in a line which are now part of the natural landscape at the edge of the cultivation. These high mounds are populated by a few small villages, whose children (and dogs) ran over the hills to meet us. They had curious home-made toys which were fascinating, made of a tin can on a long pole which they would push along in front of them. No Gameboys for these children! Robin and I wandered along the base of the Birket Habu mounds towards the southern end of Malqata, followed by our inquisitive tribe of children. Amenhotep’s palace was given the name ‘The Dazzling Aten’ and a great golden barge was said to have been housed on the lake. A commemorative scarab of Amenhotep III dated to year 11 of his reign states that:

‘….His majesty commanded a lake to be built for the Great Royal Wife Tiye…. His majesty celebrated the festival of the opening of the lake on day 16 of the third month of Akhet (Season of inundation)….His majesty sailed on it the royal barge, named “The Aten Gleams”….’

The name Malqata, in Arabic, means ‘place of debris’ and there was plenty of this. The mounds were covered in red clay pottery sherds, mostly modern, but quite a few pieces of pottery that looked quite ancient too. More recent debris consists of tin cans and windblown plastic water bottles and carrier bags. But the romance of the site will always remain in my imagination.

Robin and I had arranged to meet the others at 5.00am to go to the West Bank. Some people are just so lazy! They didn’t show up at breakfast, so at 6.00am we decided to go on our own, walking down to the Corniche and crossing to the West Bank on the local ferry, which cost us LE1 for a return ticket. Luckily most of the West Bank was crossing to Luxor at the same time, so we didn’t get caught in the rush. We found a taxi parked near the ferry dock and interrupted the driver, a trusty-looking man dressed in a galabeya who was drinking tea with some friends. They all looked as though they had just woken up. We asked him to take us to Malqata and agreed on the price of LE40 for the use of his taxi for the morning.

We first wanted to visit the tiny temple at Deir el-Shelwit, which was on the road to Armant, about 4km south of Malqata. At the time there was no problem in driving that road, but today there is a police checkpoint and tourists are not allowed beyond Medinet Habu and the Queen’s Valley road. The small Roman temple at Deir el-Shelwit was dedicated to the goddess Isis and decorated by several Roman Emperors. Unfortunately the door was locked and no guard was available to let us in, so we had to satisfy ourselves with peering through an iron grill over the doorway into the two visible blackened rooms beyond. We saw reliefs depicting Isis, Horus, Amun-Min and Sokar. There was also remains of a large propylon gateway which was richly decorated with deeply carved reliefs. We walked around the small building and noticed several upside-down blocks built into the base of the temple wall. 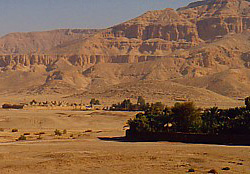 Back in the taxi along the road we had come, we stopped at Malqata, which was just a little to the south of Medinet Habu. Robin and I had wanted to see this important archaeological site, once the palace and town of Amenhotep III which is now bisected by the dirt road. On the eastern side, overlooked by the French excavation house, lies the site of the royal palace, now only barely marked out by low stone walls and a few excavation ditches. It is thought that the young Tutankhamun may have lived there as a child. There really was little to see, but I loved the feeling of the place, right on the edge of the desert. A guard appeared and offered to show us around the site. We saw the king’s throne room, with it’s dais still in place and the harem rooms for the royal ladies, as well as a kitchen area. He pointed out areas which had been excavated in recent years and we could see remains of painted limestone walls in the trenches where the wind had uncovered the back-filled sand. We saw several large pieces of Amarna-style pottery, decorated with swirling designs in the reds and blues of the period, just lying on the ground and I was amazed that it had just been left there, very lightly covered over. We also had a tour of the western side of the site, the town area where shapes of houses could still be seen marked out. At one place, a skull was poking out of the ground! Across the desert towards the mountains we could see a little green oasis – a Coptic monastery which was still in use. 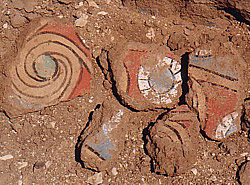 To the south-east of the palace and town site, Amenhotep constructed a huge artificial lake or basin called Birket Habu. The area is still bordered by the massive earthwork created by its original digging – a series of artificial hills which enclosed the lake’s southern shore. We scrambled up the hills to get a good view of the site and noted that the ground was littered with pottery sherds. There was a tremendous atmosphere at the site and I instantly loved it.

When our tour was over, the guardian invited us into the garden of the French house for tea. It was mint tea, shai bi-nana, brewed over a little gas stove, and the best I have ever tasted. I fell in love with the French house and decided that if I lived in Egypt, it would have to be here. The gardens were lovely, full of exotic flowers and plants and obviously well-tended. There was even a small swimming pool. I wished I was an excavator and could spend time living and working in this beautiful place.