Morning in the Kings’ Valley

We overslept this morning and after a very rushed breakfast Mary and I dashed out to the Corniche to board the coach at 7.00am for the first of our excursions. It seemed like the sun had also overslept – the weather was grey and windy and disappointing for our first day in Egypt. The cruise passengers were divided up into three groups of about a dozen, each with our own Egyptian guide. Our guide is Hala, an Egyptologist who is taking time off from her regular job at a university in Cairo.

As the coach wound its way through the wakening streets of Luxor towards the bridge and the West Bank, we were given a brief history of Thebes and the monuments we would see today, in that witty way that guides have in an attempt to break the ice, trying to get their charges to interact. By the time we reached our first destination, the Valley of the Kings, the ice had broken and we were all properly awake, including the sun that had at last appeared above the bank of cloud bringing with it a pleasant warmth. I’m not used to going to the Valley at this time of day, preferring the quiet of the afternoon when most of the tourists have gone, but although it was very crowded it felt great to be back as we all trooped up the road from the coach park between the high sandstone cliffs that enclose this sacred necropolis. As the Valley widened out the crowds dispersed and the familiar silence, unique to this place, enveloped me. I had dreamed of visiting the Valley of the Kings since I was a young child and since my first encounter with it in 1995 and many more hours spent here, the place has become very familiar. I felt like I knew every inch of every tomb like old friends.

It was a different experience visiting the royal tombs with a guide and a group. We went into the tomb of Rameses IX (KV6), the first tomb the visitor reaches when entering the Valley. This wouldn’t have been my first choice, the decoration is quite late and well developed and rather bemusing if you haven’t seen any of the other tombs that show the way the decoration evolved, but at least the access is easy and not to strenuous for starters. As we walked down the wide corridors past walls decorated with extracts from the ‘Book of Gates’ , the ‘Litanies of Re’, the ‘Book of Caverns’ and the ‘Amduat’, Hala did her best to give a commentary but she had to shout to compete with several other guides speaking in different languages. It was like being in the Tower of Babel! One of the most beautiful parts of this tomb is the vaulted astronomical ceiling in the burial chamber which has a famous double representation of the goddess Nut who swallows the sun each night and gives birth to it again each morning. 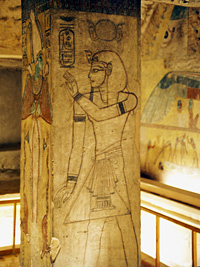 Afterwards, Mary and I set off on our own to visit the tomb of Seti II (KV15), which was left unfinished but with some beautiful reliefs and the tomb of Tawosret / Sethnakht (KV14) with it’s delicate paintings in the corridors and the king’s huge granite sarcophagus in the burial chamber. At least these last two tombs were not crowded, in fact we had Tawosret’s tomb to ourselves – which was my reason for choosing it this morning. I took a lot of photographs but it was quite dark, so I’m not optimistic that they will come out. I had a quick look at the ATP (Amarna Tombs Project) excavations – but the team were not here and the excavations covered over. I did notice a new wooden bridge that had been built over part of the road covering the excavations. 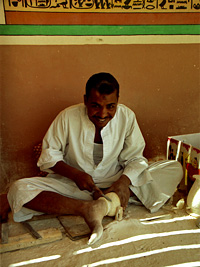 After the Valley we stopped at the inevitable alabaster ‘factory’ and while my fellow passenger admired the translucent vases and colourful statues (which are not produced here at all) and watched a demonstration by a suitably dusty stone carver, I had a chat with Hala, who I was beginning to see as a guide worth listening to. It’s nice to see a female Egyptologist (a rare breed) and she is rather a serious person. Not at all like my previous experience of guides who prefer to impart jokes rather than information. I could see that we would get along very well.

Hatshepsut’s Temple at Deir el-Bahri was our next stop – the queen re-named ‘Hot-chicken-soup’ by the only male guide! Ha-ha yawn… Here I detached myself from the group and sped up to the third terrace which was now officially open after its years of total rebuild. I spent all my time taking photographs of the scenes of the Valley Festival which adorn the walls of this terrace but was a little disappointed to find that the side-chambers were still off-limits. I’ve been very fortunate to have a private view of the third terrace on a previous occasion as the guest of an antiquities inspector, so I really couldn’t complain. I must say it’s looking good with the colourful reliefs very well-restored.

By 12.00pm the sun was burning down on us in the bay of cliffs that surround Hatshepsut’s temple and it was time for all sensible tourists to head home. Our last brief stop was at the Colossi of Memnon, the two giant statues of Amenhotep III which once graced the entrance to his mortuary temple. The sun was at a totally wrong angle for decent photographs and I chuckled to myself as I remembered my last visit here a couple of years ago – a Midnight expedition with my friend Jenny and tea with the tourist police who were on guard that night.

We were back on the boat in time for lunch and immediately ‘set sail’ for Esna, the next big town on the Nile going south. We had a lazy afternoon on deck watching the activity on the banks of the river as the boat steamed past tiny villages, unchanged since the days of ancient Egypt. A strong wind made the air decidedly cool and I watched a few brave people splashing about in the tiny pool determined to enjoy their holiday in the sun. 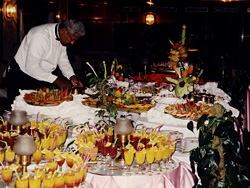 By 7.00pm we were moving through Esna lock, where the boats are lifted up to the next level of the river. Boys in little canoe-like craft drifted around our ship shouting at us to buy souvenirs which they would throw up to the passengers on deck and hope that in return, money would find its way back down. A strange way to do business. Before dinner we had the ‘Manager’s cocktail party’ with an array of precariously stacked vibrant glasses of drinks in every colour – a real spectacle. We had docked in Esna town during dinner, but we were one of a row of several cruise-boats and we were discouraged from going ashore.